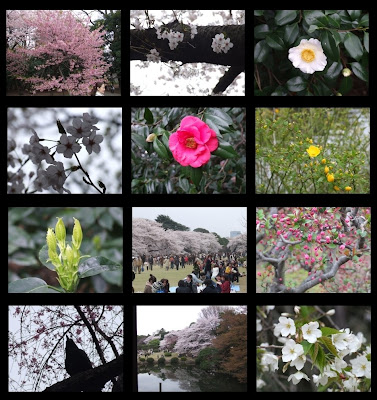 Click the image for an enlarged version.
Posted by Anuradha Sinha at Thursday, April 24, 2008 No comments:

For the last twenty-four hours, I have been trying to hush the humming in my head. My head has been playing the Tagore song, Sakhi, Bhavna Kahare Bole again and again. I have been trying to distract it by screaming, listening to other songs, singing bad songs myself, but it refuses to go away.

I have roughly translated the first few lines for you. Of course, I cannot bring Tagore's feelings into it.
Dear, what is worry? My dear, what is pain?
You all talk about love all day and night.
Is it all pain?
Is it all tears?
Is it all grief?
Hoping for what bliss do people then long for this pain?
If you see through my eyes, everything is lucky, everything is novel, everything is good. The blue sky, the dark forests, the flowers – everything is like me. They laugh; they sing. They want to keep smiling and singing. They know not any ache nor tears nor any pain.

It is strange that I would like this song so much. I never learnt Bangla. Our family was a hybrid of Bihari-Bengali culture and that's how I discovered the similarities between the apparently diverse cultures. However, Bengali literature was something I thought I was missing on discovering. My mother was thus pleasantly surprised when she realized I had picked up reading Bengali from my friends. She was glad she no longer needed to read out Sanchaita to me.

I think my mother is a global person in the truest sense of its term. She has an amazing acceptance of things previously alien to her or different from her. My father too had adapted himself so well to my mother's ethnicity. At home, I was proud to be both a Bihari and a Bengali. It was never a 50-50 situation for me. I prided myself in saying that I was a 100% Bihari as well as a 100% Bengali. I never felt the tug between Bengalis and non-Bengalis until I landed in Kolkata. A somewhat parochial attitude of some made me stubborn and I disguised my Bong connection. However, I still enjoyed the Bengali literature and music of Tagore in my room with my Bengali roommates.

I don't know if I love Ray or Tagore as much as other Bengalis do. But I know that my friend who knows not a word in Bangla appreciates Satyajit Ray's cinema or Tagore's meaning of life in his songs as much as any average Bengali does.

Coming back to today, I have been trying to get rid of this song lest I start disliking it. It won't go away. Unfortunately, I do not have a singer's or even a hummer's voice to relish the song in its entirety and let it go thereafter.

Even as I type this, I am opening the song file. I have decided to sing along, yes, sing along with Lata and relish it anyways. There is no one else in the house. And I don't care about what the neighbours may think.
Posted by Anuradha Sinha at Tuesday, April 08, 2008 24 comments: