This one is for the writer in you

Friends, Indians, countrymen and countrywoman [Why did Mark Antony (not the singer husband of J Lo!) address people this way? Were his friends different from Romans? Was he also addressing a countryside or a country outside Rome?], lend me your ears. If you fall in any of the categories listed below, we have a news for you.There is an opportunity for freelancers for a Bangalore-based magazine as well as for a national one. There is also a requirement for a columnist. Check the post on Zahid's blog for details.

What will happen on the 27th?

Loaded with homework during vacations, I used to make a plan almost everyday to finish my work well before time. I would start with distributing work over weeks. Then, my procrastination would consequently make changes in my plan and I would plan my work over the days left. In the last few days of the vacation, faced with tremendous pressure, I would distribute my tasks over the next few hours left. So, if task X had a week to start with, it may end up with only seven hours. Oh yes, I did finish my homework on time, exactly at the eleventh hour! And everybody at school thought I was a hardworking, studious girl. Only my mom knew the truth, her vocal chords completely shaken and tortured thanks to the continuous pleading, cajoling and scolding.

Why do I talk about this today? Because old habits die hard and I am faced with a similar situation now. I have exactly thirteen tasks (beeeeeeeeg ones) at hand that I need to finish by the 27th. How will I manage, you wonder. Even I have no idea, but I know for sure, I will. I will keep you posted on it.

Oh, did I tell you that these tasks are not the only work I have? I have work for at least 6 hours a day apart from this one! Do I hear, "God bless you"? Thanks. I need that.
Posted by Anuradha Sinha at Thursday, August 14, 2008 2 comments:

Email ThisBlogThis!Share to TwitterShare to FacebookShare to Pinterest
Labels: Blabbering

While I do what I do in order to eventually attain happiness, I find myself being happy for apparently the most trifle reasons: my new bike, last evening's ride, A's smiling wave from downstairs, a friend's impending visit, some old memories, an ego-massage (borrowed the term from a conversation last night) from an appreciative remark, a successful culinary experiment or the completion of a pending task. In other words, just about anything makes me happy. A says my happiness is one reason I keep putting on weight. Well...

My happiness is not about complacency; it's not about dropping ambitions. In fact, the new-found calmness has laden my multi-flavoured sundae of ambitions with exotic dry fruits and the juiciest of cherries (I am hungry!). My happy self keeps stress at bay, letting me dream big and do well.

My friends ask me if I am high on something. I think I am, and I am too high to know what it is.
Posted by Anuradha Sinha at Wednesday, August 13, 2008 3 comments:

Email ThisBlogThis!Share to TwitterShare to FacebookShare to Pinterest
Labels: Blabbering

Riding in the rain

The beginning
Early evening: inhibitions, second thoughts
Minutes later: bring bike to the ground floor (from just a floor above); look up the sky; decide to keep the trip short; ride off
After another few minutes: indecision at the cross roads; keep going straight
All this while: second glances from people, especially motorists and other cyclists
After a total of 15-min ride: halt at friend's place; boast about the bike; show the silly horn to the child at their place and feel proud

On the way back
Late evening: the drizzle dissuades
A minute later: ride out anyways
After another couple of minutes: hear the first catcall; wanna go and punch him hard - rain and the bike stop me
After two or three minutes later: another catcall, this time from a cyclist who overtakes; along comes a steep road
A minute later: rain pours down; road gets steeper; walk up the stretch
For the next two minutes: curse self for not carrying a raincoat, start the ride again
In the next few seconds: parked car suddenly decides to reverse, while another comes from the right, and a third honks; maneuver to get ahead of the reversing car
In the next few seconds: ahead of the chaotic jam behind; keep going while getting drenched
Till the destination: wonder how the house appears so far; drenched jeans makes for heavy pulling; adjust gears and fly back home
At the destination: carry the bike up the stairs; lady coming out gets impressed; fumble for keys; open the door; keep the bike inside; collapse on the couch

Decision: To ride in the mornings; to buy a helmet; to stop and slap the catcallers.
Posted by Anuradha Sinha at Tuesday, August 12, 2008 6 comments:

Beware if your co-worker is an idiot!

One of my acquaintances forwarded a very amusing news report to me [Thanks, Absa!]. It was published exactly two years ago. I am sure most of you will relate to it. Click the image below to read the report. It's titled: Working with idiots can kill you!

You can find the publishing details of the report here.
Posted by Anuradha Sinha at Monday, August 11, 2008 2 comments:

I don't have words to describe the state of mind I am in since yesterday. What caused it? The new entrant at my house, my two-wheeler. No, it is not the regular 'bike' but the original one - the bicycle. Yes, at a time when everyone is vying to buy the four-wheel-laden symbol of status, we have bought a cycle. Why, you would ask.

First, we were immensely inspired by the way cycling is looked at in Japan. Some people we knew owned the most envied cars but preferred to cycle to closer destinations, ten kilometers being normal. You could see as many cycles on the roads as there were cars, may be more. We felt it was more than the fitness-conscious mind dictating the norm; it was a responsible conscience too. Owning and riding a cycle in Japan is as normal as owning a mobile in India - everyone has one, from the CEOs to the sabjiwalas. 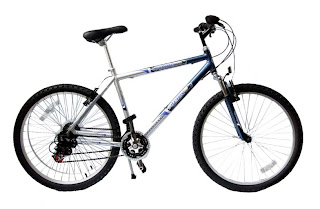 Second, our stay in Japan suddenly made us look at the cyclists back home with a renewed eye. There are a few cycling enthusiasts at A's workplace in India, one of whom is responsible for helping us choose our cycle. [Thanks, Prashant!] We realized that there is a group of people, though a handful, who are riding cycles not just for passionate reasons but for environmental as well. We realized that people think about not only car-pooling as a way to avoid traffic jams, control pollution and save fuel, but also cycling.

Third, lately, we (A, M, and I) have been thinking of contributing to the efforts of people trying to make the world a better place. Helping by cycling may sound like a far-fetched idea but it does help in some minute way. There is a muhavra in Hindi: बूँद बूँद से ही सागर बनता है (every drop counts in making the ocean). So, every time I close the tap tightly to ensure no drop of water is wasted, I feel good. There are a million such small things I can do to contribute to keeping optimism alive.

Fourth, we have two strong selfish reasons: keeping fit and getting high. Taking the two wheels in the stride does give a kick, somewhat inexplicable.

I am yet to explore the fun the 18 gears of the bike offers. I am looking forward to getting high everyday.
Posted by Anuradha Sinha at Monday, August 11, 2008 5 comments: