I sit down to write a post with a feeling that it's high time I posted something. However, I cannot focus on only one subject. Seems another assorted post is in the offing. Or, a confused one.

I have had a multitude of new experiences over the last two months. Now, one would argue that an experience is always new when it happens. However, when I say 'new', I mean 'fresh and unprecedented'. One of such experiences was an invite to the launch of a music album and the consequent feeling of being honoured and humbled. No, I was not involved in the music album in any way. I was invited to the launch by virtue of being an acquaintance of the person who was behind the launch of the album. Gopakumar, the man behind Saaral, a Tamil music album, was a colleague of mine at IBM. He moved to Chennai sometime ago. He made sure he updated me regularly on the album's workings. So, in September this year, when he informed that the album was due to be launched, my happiness knew no bounds. I had a tough time containing my excitement. When I reached Chennai on the D-day (September 29), I was humbled by the splurge of talent around. Being unfamiliar with the popular faces of the Tamil film and music industry, I kept bugging my new acquaintance (a lovely lady called Kumudham) for information on the people who arrived at the launch. 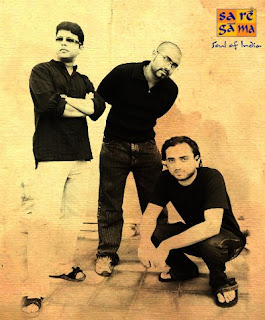 The famous faces and the launch had no trace of pomp or arrogance. The occasion had humility sprinkled with the right amount of pride. When the album's songs were being played, I could not resist tapping my feet or nodding my head to the tunes. I could not fathom a single word of the songs but they still seemed to make sense to me. And they say we are different. That moment, I felt I belonged to Chennai as much as I belonged to Bangalore or Kolkata or Dhanbad. If we were asked to remain in our states, how would we relish the friendships and tastes of the different lands of our country? OK, I am digressing. Will keep this for another post.

When Benny (Benny Dayal) sang a peppy song from the album on Sanjeev's (Sanjeev Philip Thomas) guitar tunes, people found it difficult to resist the temptation of hitting the floor.

I was humbled at the sight of the singers Unnikrishnan, Karthik, and Naresh Iyer. And I felt proud at being introduced to Benny and Sanjeev who obliged me with their autographs on the album's cover. Gopakumar was of course the first one to autograph! I cannot quite imagine his feelings at being able to finally make one of his dreams come true. Oh yes, he is the main music composer of the album, lyricist for a few songs and singer for one.

After the event, I was a part of an informal dinner with Gopakumar's family and a few friends. This guy has always been someone for whom family comes first. Even with ambitions of movie making, a fulfilled dream of a good music album, a passion for photography and a secure job, he has his wife and daughter as the number one priority on his list. I wonder how he manages. But I guess, people like him are the ones who can. During dinner, I casually remarked, "How do you manage to make music, work on making movies, stick to the passion of photography apart from attending a 9-9 job? People do not even find time to watch movies!" With a smile, he said, "I watch movies too."

P.S. For all those who would like to experience Saaral, you can order the CD online here.
Posted by Anuradha Sinha at Sunday, November 16, 2008

what do i say anu? how is that you always make me feel great :) thats a lovely article. im "Honoured and humbled" too :)

That's a very nice article Anu! I am an ex-colleague of Gopa. While I and Gopa have worked together for only 3 months, I and my friends always wondered how Gopa managed to find time for creative things inspite of his hectic work schedule. But believe me, this guy is talented, professional, and so smart that he finds time almost for everything: Family, Work, and Music. The best thing is that he manages to do a neat job too :)

Thanks for the lovely article, I thoroughly enjoyed it.

its really a nice article...and truly like the last para...quite motivating...

I don't know Gopa. But Congratulations & Hats off!

Anu, thanks for bringing this to us with this article, its inciting.

Not to forget, he manages to dedicate a lot of time for blokes like me too....come to think of it, i quite did not understand it for the last 12years......

Thank you for a great article about my closest buddy's dreams...he has realised one, he has more..

:) Yup, Rags. Hope to witness the fulfillment of his many dreams.

It was very refreshing to read your post! Being one of Gopakumar's close friends, have known his passion for Music as a part of our lives too! Though could not make it to the launch, I sure got a feel of the launch through your post!! Cheers!

That's great, Rajani! I am glad you got a feel of the launch through my post. Thanks.