Getting inspired and gathering courage

You may have the best of intentions, the greatest of virtues but if you don't have the courage to forward it (sic), you are a lost cause. I read this as a teen and this has stayed with me since.

Today I am here to tell you a story - a story I became privy to about a month ago. 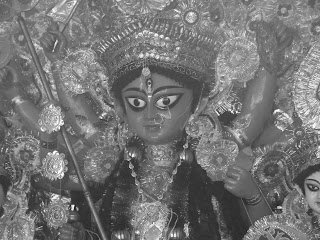 It was a couple of years before 1920. A young woman, aged about 17 or 18, joins her husband's family at his ancestral village for Durga Puja a few days/months after her wedding. This Puja, she is told, has been nothing sort of a family heirloom for centuries. While she joins the family in the preparations and celebrations, she learns of several customs of the family and the village. One of those makes more than a mark on her. As a rule, all men of the village eat first at the puja mandap and then the women follow. While this was absolutely normal for those days (and well, even now), she is repulsed by something else: the women eat on the plates left by the men. These plates are made of shaal leaves. One would think the women eat on their husband's or a family member's plate but that too - equally despicable if not more - is not the case. A woman eats on the dirty, used, leaf plates of any man. While she is appalled, this teenage woman realizes that this has been happening for centuries and nobody seems to object or even notice the wrong in this custom. However, instead of living with the tradition, she objects. And within a matter of days, the centuries-old custom changes. There must have been debates, disgust and shock but I am not aware of the details. The only thing I am aware of is this woman's courage.

While I marvel at this lady's valour, the story's narrator tells me that this woman was an educated lady by the standards of those times. I am also told that one of her ancestors was Raja Ram Mohan Roy. I am wowed and also proud, for I, a humble woman, happen to be this iron lady's granddaughter.

I have heard other things about her but this incident has left me with a sense of awe and guilt. I hope I too can bring about a change, however small.

Hello Anuradha beautiful, inspiring little story...maybe you could develop it with imaginary inputs. Could have been a Jhumpa Lahiri short story! Welcome back:)

Abhi, you are right. This was a hastily-written post. Can even see grammar errors (hangs head in shame). The idea was to just share this with everyone.

Thank you, Bubai. You have reminded me of my mom. Shatadalbasini Devi was a bold lady.
- Jayanti Mukherjee