Impromptu events are usually the most cherished. Today was such a day. Today being a holiday in Japan, A and I had planned to visit the Showa Kinen park in Tachikawa, with the intention of spending the day cycling and boating. However, we woke up utterly confused some time around noon. After a few minutes of complete bewilderment, we decided to go ahead with our plan. An hour later, while we were on our way to the railway station, we wondered if it was any point going that late to a place that closed early. The scorching sun helped give the extra push to our confusion and we dropped our plan. Instead, we reached our usual destination, the Kawasaki station.

After an hour or so of shopping and eating at the big mall near the station, I felt exhausted and wanted to return home. A, however, showed his displeasure over the way we were spending the day. I was unhappy too (I hate visiting malls!) but did not know what else to do. He asked if I would be comfortable walking a little more. So we walked through the overcrowded streets, past a couple of talented street singers to reach the Keikyu Kawasaki station. We boarded the first train we saw, or so I thought. A knew where we were going. I didn’t mind it much since we had got ourselves seats. Three stations later, we found ourselves getting off the train and walking towards the south exit of the Kawasaki Daishi station.

We walked our way to the Buddhist temple there. Like any famous temple in India, the way to the temple was lined up with shops selling tourist items and similar paraphernalia. 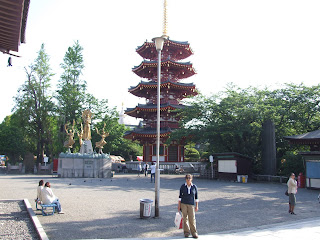 The temple was beautiful but lacked the hustle and bustle of its Indian counterpart. We followed others washing their hands in an artificial fountain in the centre of the temple courtyard. One does not, however, need to take off shoes in the temple premises here. We saw one idol of Buddha in gold in a small temple and a lot of gold accessories and décor in the main temple. We did not enter the main temple as we saw no one going inside; we had a glimpse of the interior through a huge glass window. 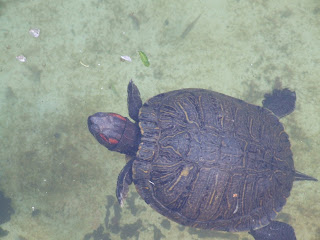 The temple premises had a lot of food stalls, but we did not bother to check as we were not hungry. We took fancy to the numerous turtles resting in a water reservoir in the premises. We spent a lot of time observing them. Their hand and neck movements gave me goosebumps. A and I were extremely fascinated with the texture on their shells. A had a turtle pet for a few days when he was a kid. My goosebumps were back when he told me he wanted one again.

After feasting our eyes on the water-loving reptiles, we left for the nearest park to rest. Eyeing a baseball game, A decided to give me a crash course on the game. Just in theory. So, we sat on the once-upon-a-time seats, crushing the wild grass with our feet, just outside the baseball field for some time to observe the fielding team thrash the batting one. We left the privileged seats the moment the teams changed roles.

We spent some more time in the park, doing absolutely nothing. Two trains and a bit of walk later, we came back home quite content. Sometimes, the absence of a plan makes the day.
Posted by Anuradha Sinha at Tuesday, May 06, 2008

Email ThisBlogThis!Share to TwitterShare to FacebookShare to Pinterest
Labels: Experience