My two cents on Raavan

Check out the appended text ** at the end of the post.

First things first, I never liked Ram. I had questions on every act of his ever since I learnt about Ramayan. First, the bits and pieces of the epic came as accompaniments with each morsel my mom so cleverly put into my mouth. Next came the TV serial. While people put agarbattis on their TV-sets for Arun Govil, I argued that Ram was no ways the Purushottam he was made out to be. The agni-pariksha was the biggest proof of it. As a kid, I guess I had more courage. I voiced my opinion on forums that considered it sacrilegious to talk ill of Ram or any other god. God is god, I was told. Of course, I didn't buy that argument.

During numerous discussions with friends and some not-so-rigid family members, I found out that I was not the only one who thought the way I was thinking. And my mom seemed to be the biggest critic of gods. She is an ardent devotee, yet she has had her questions about the myriad mythological stories. 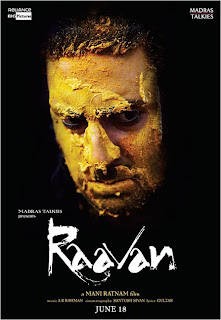 In my adolescent years, I came across a play written on Raavan. The book was written by Chaturbhuj (the writer's pen-name, I think), a friend of my father's. Ma and Baba had told me about Raavan's knowledge and his generosity, in fact all the virtues one could think of. His biggest mistake, it was said, was kidnapping Sita. After I read the play, I became a fan of Raavan's.

Then much later, Lajja happened. No, I didn't like the movie; in fact, I have never managed to watch the entire movie in one shot. I have watched bits and pieces of it every time it came on TV. Now, Lajja had a very powerful scene where Sita (portrayed by Madhuri Dixit) gives a heartful to Ram (Sameer Soni). I think that scene was the highlight of the film. I would watch the film again only to go back to that scene. I could see my thoughts being reflected in the words that came from Sita's mouth. One would smell feminism in them, but those words showcase the bitter reality.

I watched Raavan yesterday. And sure enough the title was enough to pull me to the theatre but what assured me was that it was Mani Ratnam's. The film definitely gives you the Ram-and-Raavan-are-not-distinctly-good-or-bad message and not very subtly either.

By the reaction of everyone in the auditorium, not barring me, I could tell that people are going to be extremely disappointed with the movie. I made a lot of comments during the movie, something I rarely do. So, was the movie any good? Well, it was a play enacted on a big screen. It had all the elements of a play - over-the-top drama, overplaying of emotions, and poetry - not in words but in pictures. 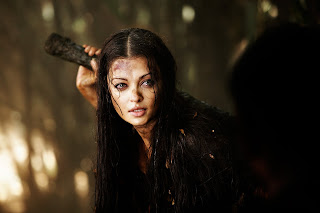 Raavan was like poetry. And you know what is the deal with poetry. Not everyone will appreciate it; not everyone will feel it; not everyone will like it. Everyone has different taste in poetry or art; one piece cannot appeal to everyone. Yes, that is the deal with Raavan. Raavan was not a movie. Raavan was theatre, rustic but not raw. It was glorified jatra or nautanki. It was different from what one would expect in a movie; that is where Raavan may fail in capturing the audience's hearts. The movie is a visual delight though, thanks to Santosh Sivan.

As per me, I had my problems with Raavan. It stretched for me at some places. I felt Abhishek Bachchan (who I like and think can act) overacted; I guess I would have showered praises on him had I seen this performance in a play. I will rate his performance in Guru better than that in Raavan. I liked Aishwarya Rai Bachchan as the not-so-demure Sita. At many places, I felt she was the hero of the film. Vikram played his part well, and so did all the supporting actors. I liked Ravi Kishen in particular. And I liked Priyamani who played an enchanting Surpnakha. In fact, I am looking forward to seeing more of her work. Anyways, this post is not a typical review of the movie. It is about the thoughts that crossed my mind as I watched the film.

A couple of phone calls broke my chain of thoughts while writing this post. Hope to talk more about Ram and Raavan in another post some day.

** Addition: For those who don't know, Vikram (the actor who plays Ram in Raavan) has played Raavan in Ravanan, the Tamil version of the film. I want to watch the Tamil one to see how he could handle both the roles in tandem.

There is always a bias in any story. No matter how neutral a narrator may claim to be, he will still have a bias. Because, a narrator cannot shun his thoughts and perceptions out of what he is saying. Infact, he says what he perceives. Everyone does.

In my personal opinion, the one who wins, is always the one portrayed as the Good. Infact, the line we always read
Good always wins at the end, should have read, the winner is always termed Good.

The Concept of God has always been flawed.

Having done my rant, I must admit I have not seen the movie yet.
Am drawn for the Mani Ratnam fame, and should just try it first hand before having any opinions.

As per many scholars, the writers of these epics never mentioned categorically in their text about the moral superiority of Ram in Ramayana or Pandavas in Mahabharata. It is the interpretation of some that is passed off as the original epic. True or not, I am going to watch the movie. What you dislike is what usually gets my attention. ;)

Camera work, although good overall, was dizzying at some points. But thats all there was. Wouldn't recommend Raavan to anyone ... except Namdeo, the namesake.

Schnell: Today, somebody asked me to sum up my opinion on the movie and I said, "Santosh Sivan's cinematography and ARR's music are the saving grace." I could not go on and on about the myriad thoughts that crossed my mind while watching the film. :)

Mrinal: I know. Even Valmiki didn't sing praises for Ram. It was Tulsidas who put Ram on a high pedestal. But yes, the good-over-evil undertone has been present in both the epics. Do tell me how you found the film.

Kid: I will look forward to hearing from you on Raavan. :)

Hey Anuradha,
Haven't seen the movie yet but I'm told Vikram has a done a better job than Junior B in the Tamil version. Hamming it appears is a family tradition for the father-son duo!

But I completely agree with your observations on Ram. I remember asking my grandpa as a kid why Ram killed Bali by deceit if he was God. That is another example apart from Sita's agnipariksha of Ram's ungodly acts.

Similar to Dr Chaturbhuj's play on Ravan, Bengali poet Michael Madhusudan Dutt had written an epic called the Slaying of Meghnad in which Ravan was portrayed as the hero. It was Ramayan re-written from the point of view of Ravan.

Ravan, the grandson of rishi Pulastya was a learned man, a great warrior, a statesman and even a musician who played the veena and was a devotee of Shiva. Ram knew all that which is why he asked Lakshman to take lessons from the dying demon king.

To put it crudely Ram was given a supari by the gods to kill Ravan because he had become more powerful than them because of his so-called immortality vardan.

So Ram had his job cut out for him fair play be damned! But we want to build a temple in his name and are ready to kill other human beings for that.

I like Raavan more than Ram. Ram is much too staid and a prude. :)

If I (re)read or (re)watch Ramayan, all I see are another set of human beings going through their normal cycles of 'life happening', 'expectations being set & tried to met', 'emotional wars within' and many more terms we usually live our lives through. There will always be qualities of people that we appreciate & dislike; that does not leave us with the only choice of terming them as either evil or godly. There are lot of grey areas that cannot be termed & need not be.

Well, this was nothing about the movie, haven't watched it yet; Just my take :)

Loved reading your post and comments, it has always been a good arguable point for Ravan was evil or not. About the movie review, I still cannot believe how Maniratnam could make such a lame movie. I thought its well hyped mediocre movie.. But it falls way below expectations..